songs from the shadows

a little while ago a friend lent me a copy of julie murphy's album 'a quiet house'. after listening to it once  i was completely spellbound and began to play it every day. when i love a piece of music i often listen to it on repeat and become absorbed by it, lost in it. and this album touches something deep inside me.

it wasn't until i'd heard it a few times that it dawned on me that the words of one song 'convoy' are the haunting words of charles causley- an all too often unsung poet, but one of my cornish heroes. he was a very special and inspiring man and whenever i think of him i'm always amused by his humble response to being honoured as a 'companion of literature' at the age of 83. he replied, "my goodness, what an encouragement"! a couple of months ago in celebration of national poetry day causley's poem, 'i am the song' graced the famous piccadilly lights hoarding in the west end- a tiny fleeting gem of human truth sailing in a vast ocean of commercial advertising. and what a great tribute to the man who regarded all poetry to be magic and a "spell against insensitivity, failure of imagination, ignorance and barbarism".


i am the song

also influenced by causley is the talented anna maria murphy, one of my favourite contemporary cornish poets and playwright for kneehigh theatre. for my birthday i went to see 'the kneehigh rambles' at the tremough performance centre just up the road from me. anna maria has been walking the length and breadth of cornwall collecting stories which are wildly exaggerated and performed as a series of sketches with kneehigh actors, wonderful puppets and a duo of enormous dancing crabs! it was both touching and hilarious with moments where i was actually in pain from laughing so much. and there was a little bit of causley thrown in for good measure. i love it when different things i like link together, in this case, two murphys!

my friend told me that julie's recent gig in st ives had been beautiful and said that she'd probably come back to cornwall next year. but i was dying to see her live and like a small child who's just had a birthday, a whole year just seemed like too long to wait! so i was very excited when i heard about a last minute performance in a church in hampstead and when i realised it was on 'megabus wednesday' i just had to go. (i recently discovered you can travel anywhere on the megabus on a wednesday for £5 which is less than the price of a bus to redruth! and if you leave from plymouth at an ungodly 1am you can be in london by 7am, albeit with much loss of sleep but not much loss of money- it's a bit like the poor man's sleeper train!)

so i took some sewing work to keep me out of mischief and caught the last train to plymouth. a man sitting nearby became curious, came and sat opposite me and watched intently at my repetitive tasks of folding, snipping and attaching fastenings to 144 small pieces of lining fabric. at first it was a little disconcerting and communication was tricky as he spoke very few words of english. after much perseverance he managed to tell me that he was a tailor and seemed keen to help. so i got a little production line going where he turned the pieces right side down and handed them to me in pairs. i must say it didn't really speed up the job but time passed more quickly. and it amused the train conductor who joked about it being 'craft night' onboard.

however, once on the megabus 'craft night' turned into one of very little sleep (through being constantly woken up as opposed to all-night craft activity!) and feeling more than slightly dazed i arrived into the world of dazzling lights that is london before christmas. and to add even more bum-numbing hours to the journey, i'd made a last minute decision the day before to go and see the 'ghost's of gone birds' exhibition in brighton. so.... another bus and a steady trundel through a very snowy winter landscape.

once in brighton i met up with a friend of a friend who i'd recognised on the facebook gig invite. i didn't  know her but it turns out that she plays in a band called fernhill with julie and had lived in falmouth briefly. we had a look around the exhibition before retreating to one of brighton's many lovely coffee shops.

i came across 'ghosts of gone birds' at port eliot festival a couple of years ago and was instantly inspired by the concept. the ongoing art project is dedicated to breathing life back into the birds we have lost and raising awareness and money so we don’t lose anymore.  after shows in london, liverpool and now brighton, the project has amassed "a creative army for conservation of over 180 artists, writers and musicians". the donations and a percentage of the profits from the sale of the original art and prints will go directly to help frontline conservation projects fighting to save the lives of endangered birds around the world.

and apart from the idea, i just love the exhibition visually and the way it links the work of musicians and artists of all media at varying stages of their career and experience to create a rich and diverse room full of birds. amazing!

the brighton show is in a small gallery opposite a big church. there is a variety of painting, printmaking, sculpture, textiles and installation. i was also surprised to recognise stunning work by a couple of falmouth artists. a back door leads out to a small courtyard where a large piece has been painted graffiti-style on the exterior wall. easily overlooked is an old and interesting looking out building where a large flock of tiny white birds have escaped their cages and dissolve quietly back into the shadows. very beautiful.

and then back again to london. i made a quick visit to 'the cloth house' and my senses were bombarded by the busy streets adorned with huge flashing festive marmite jars suspended overhead. tiredness started to kick in. i became mesmerized by the enormity of it all and swallowed up by the vast camera-wielding crowds. every so often i had to snap myself out of this slightly overwhelming light-gazing commercial christmas world to cross roads. it occurred to me that it might be a good chance to do some christmas shopping but a part of me was strongly resistant. a small box of birch bark stars was where that idea began and ended.

soon it was time to track down the church in hampstead. away from the hustle and bustle of central london it was quite moving to come upon a little table on the pavement lit by candles, a piece of paper reassuring me that julie murphy was playing here tonight and that i'd found my final destination.

once inside, the church was very quiet. it was bare and dark and candle lit. a scattering of seated figures broke the horizontals of the wooden pews and things were about to begin at any minute. i'm not used to gigs actually starting on time so was instantly relieved i hadn't arrived any later. my journey from cornwall was appreciated, which was lovely, and although i knew i was very far from home i felt i was in a small village. travelling overnight was disorientating and the last night and day had been a collection of contrasting scenes; the quiet starry sky above the falmouth train platform, drunken revellers leaving union street clubs in late night plymouth, the glitzy tinsel town of knightsbridge shops before dawn, snow-halted traffic and a fox prowling through the white woods somewhere near gatwick, the watery sun breaking through the cold air over brighton beach, an exhibition of art and conservation followed by coffee in bohemian brighton lanes, the flashing marmite jars and bustling shoppers of oxford street and finally the shadowy flickering arches of a church that could be anywhere in any time. it took me a while to take it all in. that these songs i'd been listening to at home were actually happening here, live in front of me by the actual person who wrote and sung them, the candle lit reflections glowing gold in the real trombone before me, the shadows gently shifting with the music.


there was a feeling of entrancement, of being spellbound, of people united and captivated by the music and atmosphere. the man at the end of my pew edged nearer and whispered that it was a very special evening for him as he had met his wife at a fernhill gig. this seemed very romantic and without thinking i immediately asked why she hadn't come too. he replied with a tone of apology that wednesday was her bingo night and that he was the real 'folkie'. red candles lit the alcoves near me. one of the candles dripped down the wall at first slowly, and then with building momentum until a small red river cascaded down the radiator. this echoed a feeling of letting go. the combination of julie's voice and piano with ceri's trombone and harp were breathtaking and hauntingly beautiful; sometimes sad and poignant, contemplative, emotional and soulful. there was a sense of stillness, of time stopping as people seemed to be carried by the music to deep interior places. the heartfelt singing seeped into my soul and i was so happy to have been a part of it. so a big thank you to such warm and welcoming musicians.

it's late and i'm writing this on the bus (on paper which i'll type up tomorrow). my light is the only one lit. i'm surrounded by the deep breathing of sleeping people, the rhythmic vibrating of the road and the eek eeking of my window which only stops when i hold it (it is after all the shonkyness of a megabus and what you'd expect from a £5 journey). songs from the evening echo through my mind as i retrace my journey through the night. my writing becomes too wobbly to read. and soon it's time to turn this last light out. 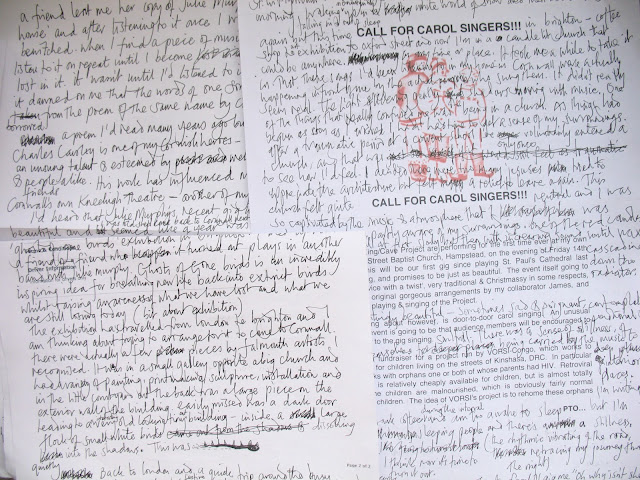